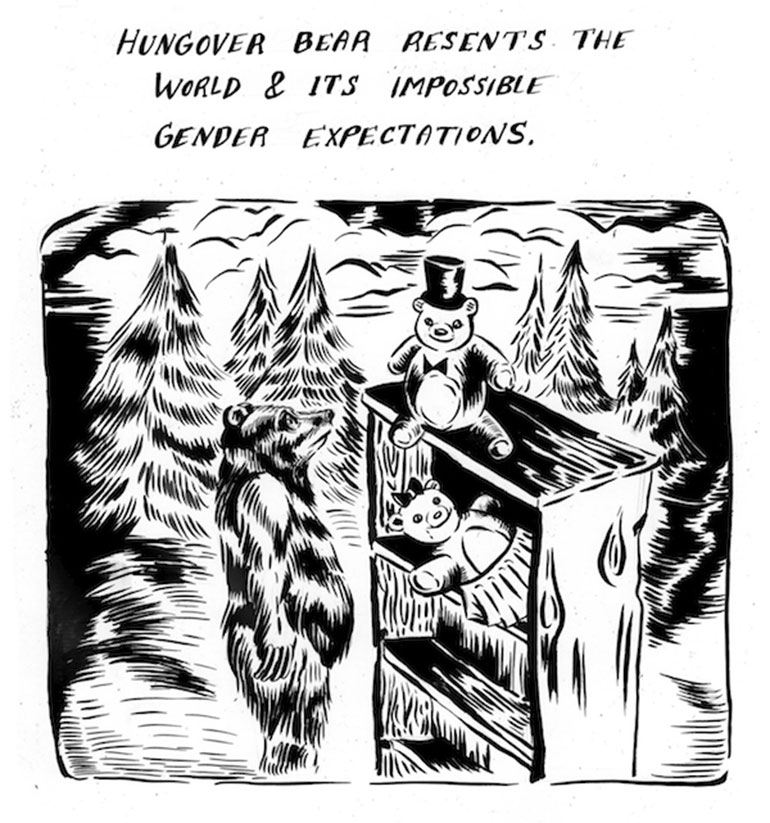 Hungover Bear, written for McSweeney’s, (an important marker in design/print/illustration and publishing history), was your first comic serial… can you tell us about it and what it meant to your career?  And why a bear?

The start of “Hungover Bear and Friends,” really marks the beginning of my professional comic career. Before then I was making very emo comics about myself and sometimes about a queer secret agent named “Pep Proper,” but I wasn’t showing these to anyone. Having a weekly space forced me to create regularly and learn how to tell more concise visual stories. A lot of opportunities came about because of that comic, namely that I met my agent, Alex Slater.

“Hungover Bear and Friends” is a comic about animals and feelings. It follows melancholy woodland creatures as they try to navigate life. It often focuses on “Hungover Bear,” who is just a sensitive bear in a sweater trying to make it all work. I chose a bear because they’re easy to anthropomorphize and are stereotyped as physically dangerous, which I thought would be a nice counterpoint to HB’s poetic nature. 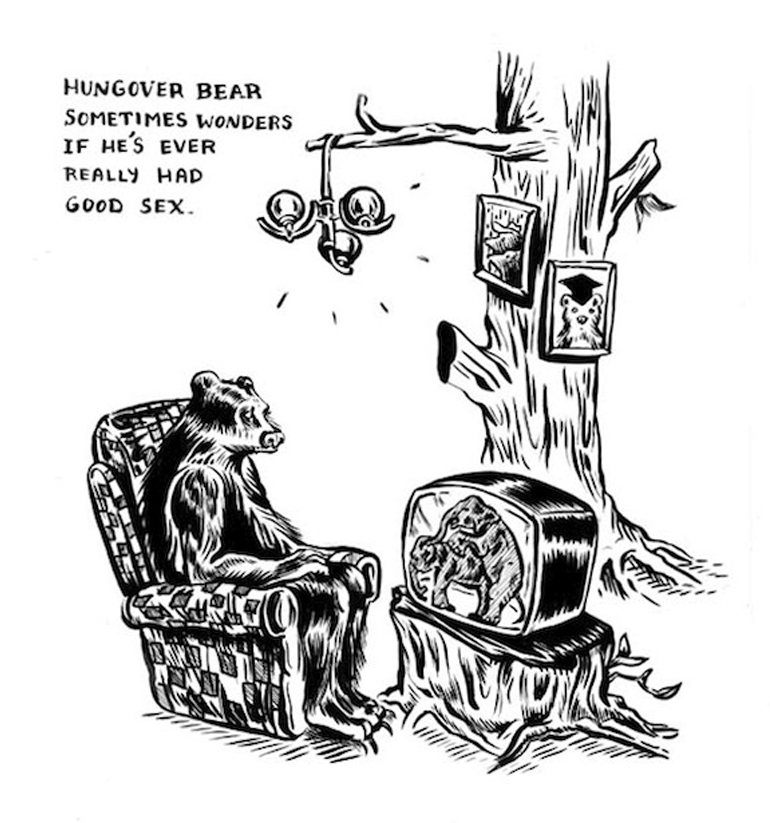 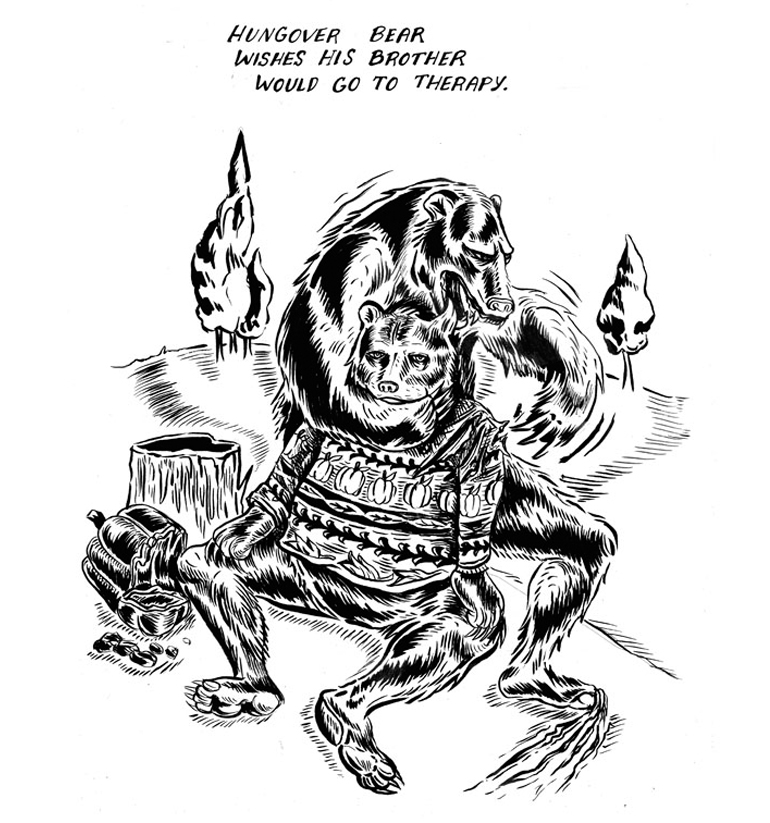 Hungover Bear lasted from 2013-2016 – how did the content and the artwork change during that time period?

In the beginning, it was more about the punchlines and the characters weren’t as developed. As it progressed, the characters became clearer to me and they took on a more streamlined, specific visual look. The comic also broke out of the one-panel format as I began to explore longer narratives. The characters sort of demanded more space and I gave it to them. I’m actually planning to revive Hungover Bear soon because I miss him. 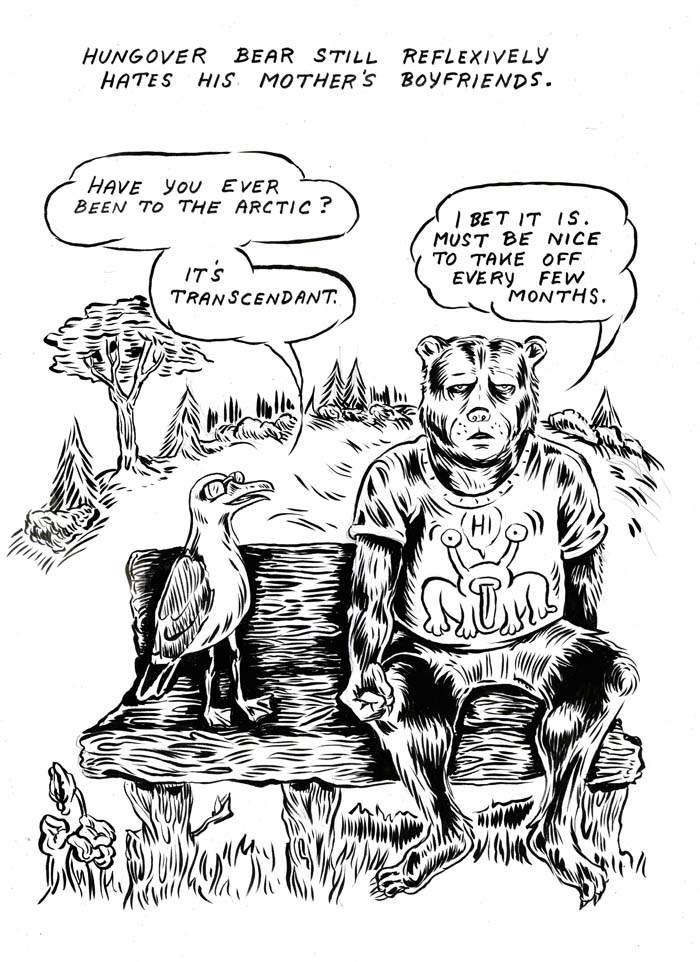 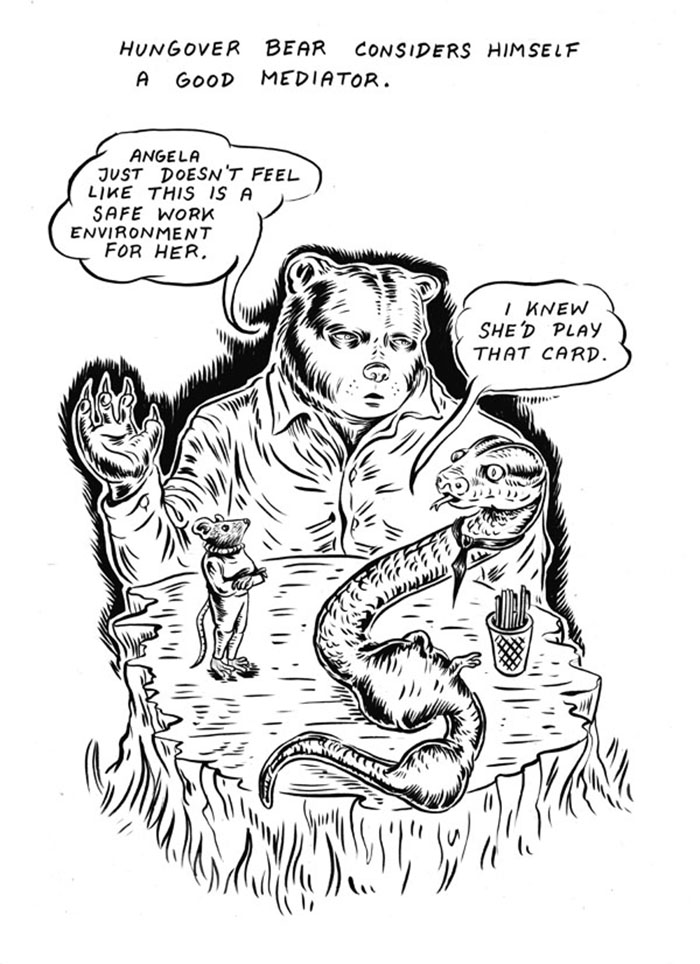 Also during this time, you were doing your workshops, working with refugees in Berlin, teaching comics. How did this come about and is it something you enjoy and continue to do?

The director of a shelter, Mathias Hamann, asked me to teach a regular comic workshop for teenage boys in a shelter that he ran in Moabit. Eventually, it became an open class and others joined. I conducted workshops for a year and a half in a few different shelters, which was interesting and sad and poignant. It learned a lot about comic-teaching and also the heartbreaking effects of asylum policies on people fleeing war. 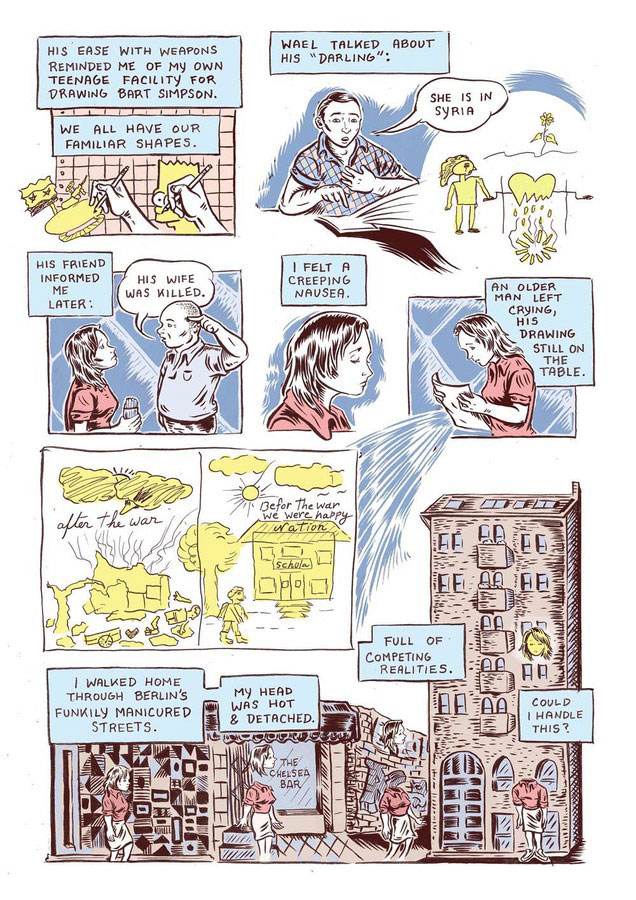 You said that it was a bit of a shock to draw ‘Drawn to Berlin’ (your first graphic novel, published by Fantagraphics) as you had always been a fast worker. What was it like to create 196 pages?

Wow, it was exhausting to create a long(ish) graphic novel. At some points, I was drawing//inking between 8 and 10 hours a day, which is really too much. I became an actual hermit for the first time in my life.

It took me by surprise because I am a quick-draw (I can never resist a Wild-West pun) and often finish things before the deadline. But I realized early in the process that long-form visual narratives require an incredible amount of stamina. And I was out of shape.

How much of the book did you research about Germany’s past relationship with immigrants and how did you feel about doing a book that possibly makes a statement in reference to the current changing political climate happening now in Europe?

Most of the book takes place in contemporary Berlin and looks at the current, charged political climate through the lens of people I met in refugee shelters. I observe and interview people about their relationship to drawing, and I follow a couple of young men as they try to build lives in Germany.

The book also explores my life as a privileged immigrant and the receding mirage of Bohemia. There are two chapters where I explore the “Refugee Crisis” of the 1920’s where Jewish people from eastern states like Galicia (now Ukraine) came to Berlin after fleeing wars and pogroms. I illustrate some of Joseph Roth’s journalistic takes on Berlin at that time. The headlines and attitudes mirror today’s anti-immigrant rhetoric in terrifying ways. 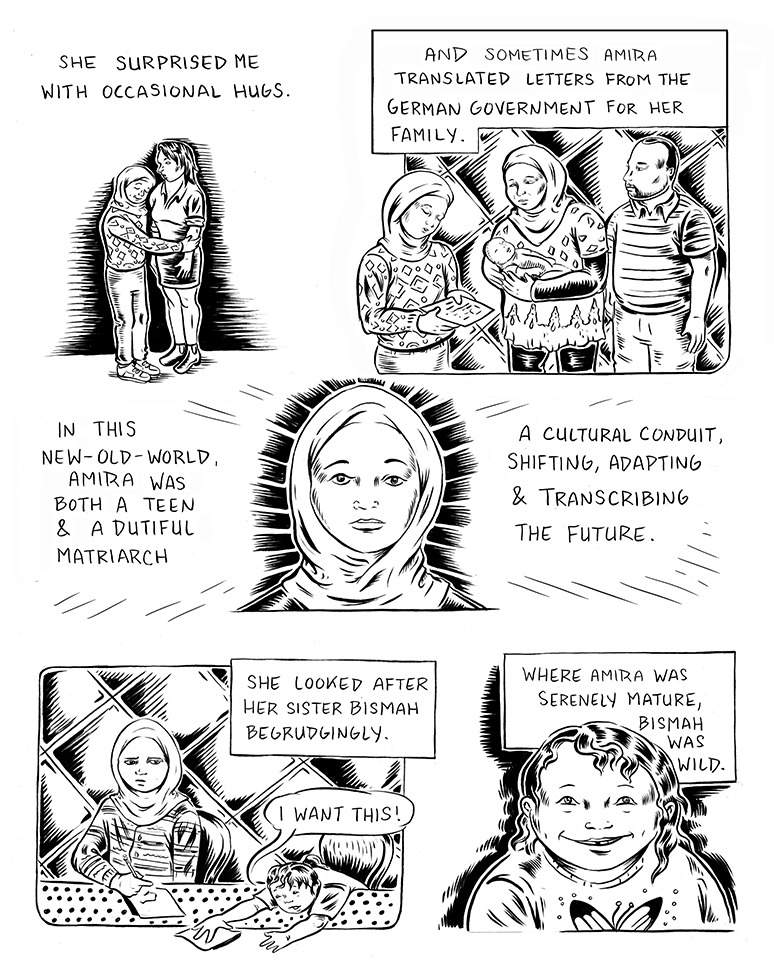 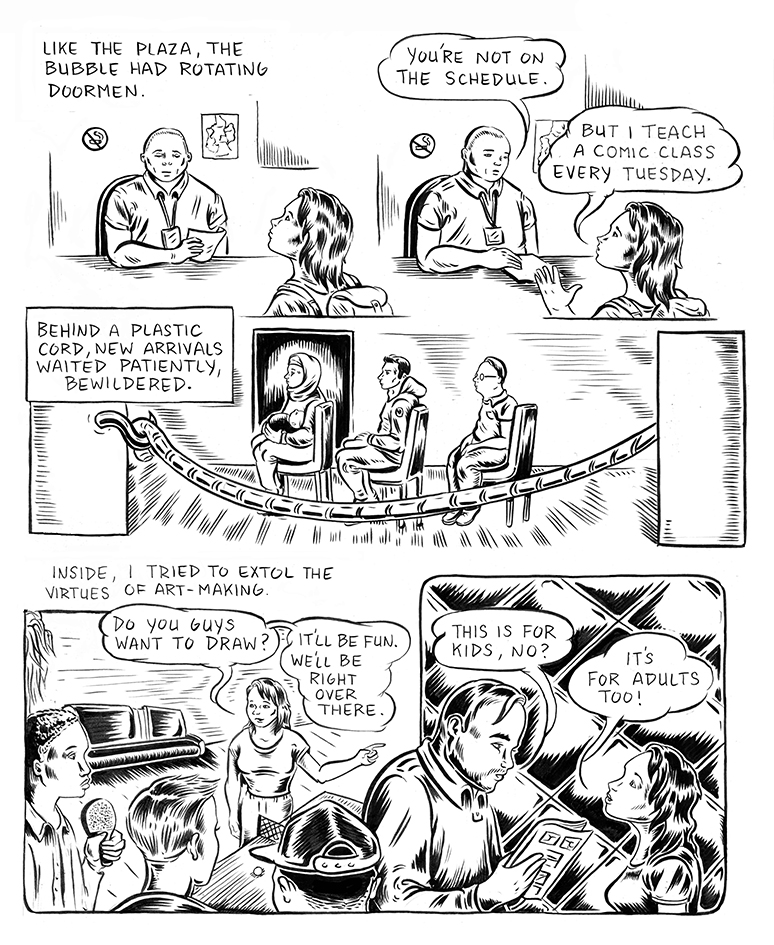 How important is the cultural element and or social involvement /discussion in your titles?

I think it’s really important. I try to create comics from a slightly offbeat angle. I definitely appreciate satire and metaphor a bit more than straightforward caricature or political cartooning.

Right now a lot of us are trying to be more involved socially and comics are a potent tool through which we can tell specific, interesting, visual stories. Comics can help foster empathy and understanding among readers. I’m increasingly convinced that stories are everything. The ability to create comics also opens up new avenues of communication for those who might otherwise lack the agency to tell their stories.

The different series you did for New York magazine section called The Cut led on to other serials including work for the infamous New Yorker which is a landmark for their use of cartoons and provocative artwork. How does it feel to be using your pen for such an illustrious publication? (I immediately think of that iconic cover by Art Spiegelman featuring the Hasidic Jew and a black woman kissing, or covers by Chris Ware, Adrian Tomine to name a few… )

Since then I’ve done quite a few comics for them, usually quirky, mid-length pieces like ‘Freelancers of the Wild West.’ 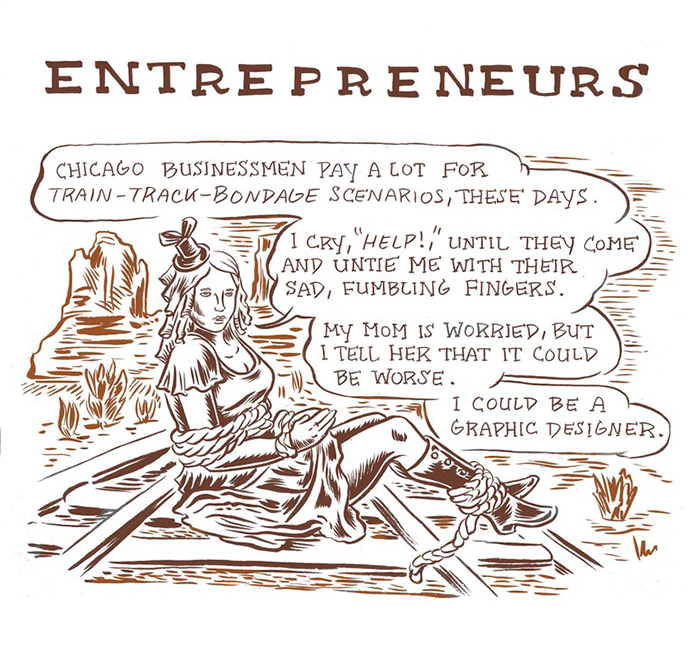 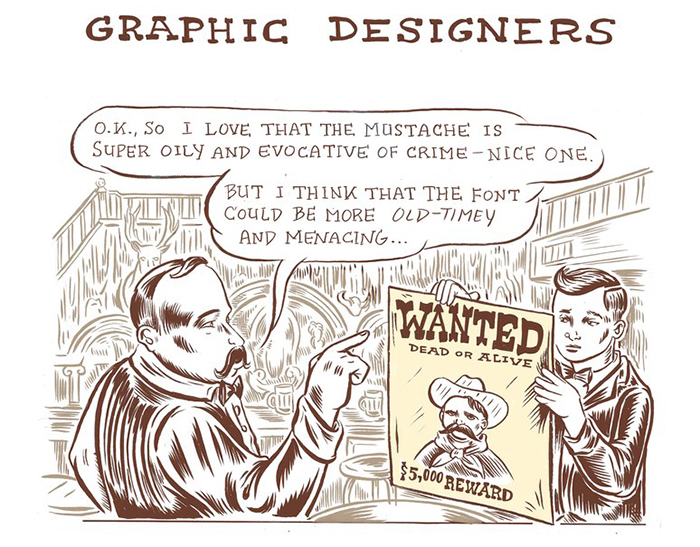 Do you feel that the comics world continues to struggle with female comic content and artists?

Yes, I do, but the various reasons for the continuing disparity and how to address it elude me… I am, however, excited by all the great female and gender non-conforming talent in the comics world right now. Liana Finck, Jillian Tamaki, Emil Ferris, Alison Bechdel, Edie Fake and Anna Haifisch all come to mind.

I have been hearing that Berlin has a growing number of graphic novelists inhabiting the city…how do you feel that Berlin has influenced your work and does Germany have a history of comics culture like France, Italy or Japan?

Berlin is the place I’ve lived out many of my formative career years, so it has influenced me immensely. It’s also an incredibly compelling place where a lot of complex, contradictory stories reveal themselves. My book, “Drawn to Berlin,” is partly about these kinds of political and aesthetic complexities.

The comics scene in Berlin is certainly growing, but I still don’t think it has the market or history of places like France or Japan. I’ve been spending some time in Paris over the past year and have marvelled at the cultural emphasis and respect that comics are given there. You can find fairly obscure underground graphic novels at most small bookstores and even local libraries (!)

But artists are always moving to Berlin and the conversation around comics is becoming more mature and interesting. This year the Berlin Senate gave out a comic stipend for the first time alongside the seventh iteration of “Comic Invasion,” Berlin’s comic festival which highlights the dynamism of the city’s young scene. 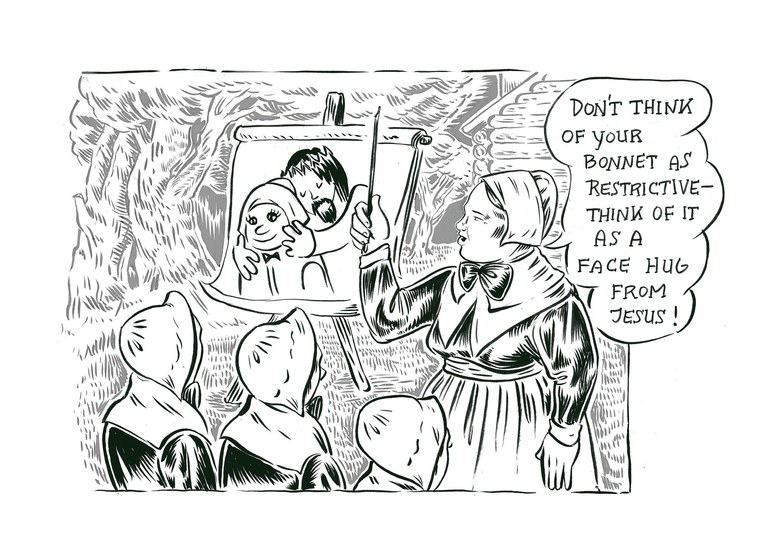 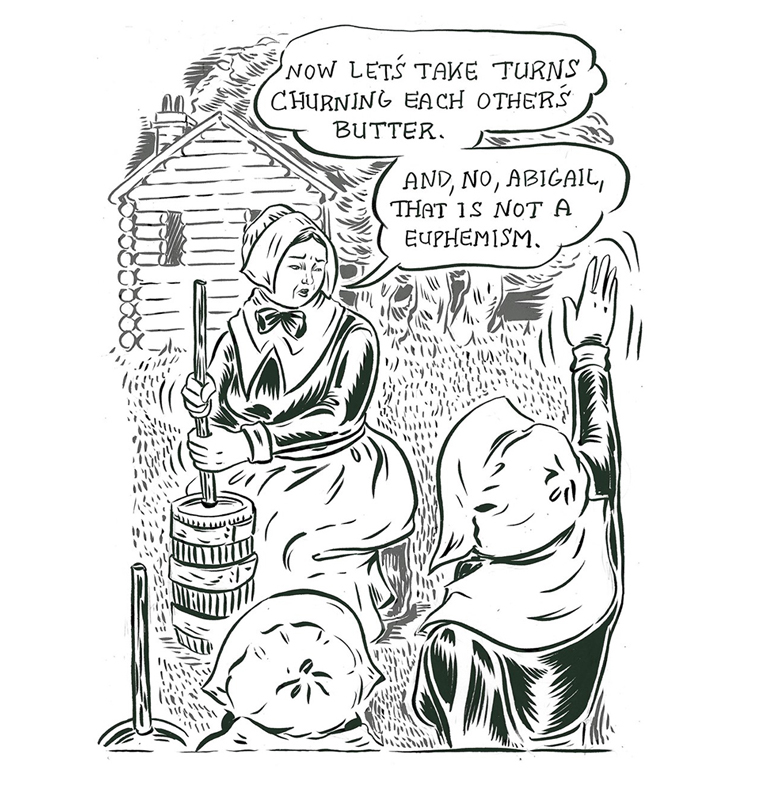 You are working on another title -can you talk about what it is and the story behind it? How much of it is research work and do you enjoy doing all the research behind the books you are working on?

Right now I’m working on a series of vignettes about the visuals of propaganda. The project started with an exploration of the super Germanic font “Fraktur” in my upcoming graphic novel “Drawn to Berlin.”

So far I’ve researched Soviet statues, Cold War comics and French propaganda posters during WWII. Now I’m looking at the evolution of resistance aesthetics, from the banners of the French Revolution to Black Panther Party posters and beyond. At some point, it will become a graphic novel, once I’ve recovered from my first graphic novel that is.

‘Drawn to Berlin’ is available to purchase in the US and will be out in Europe in the new year.

“One of the finest pieces of comics nonfiction I’ve read in years.”
– New York Magazine: Vulture

“Fitzgerald celebrates the cathartic powers of art in her memoir recalling comic workshops she led in Berlin’s refugee shelters. This ode to her students isn’t just a portrayal of a city in flux or a people displaced―it is a portrait of the power of art.”
– Publishers Weekly

“Fitzgerald uses art to illuminate the human dimensions of [the refugee crisis], a situation often sketched in statistics.”
– The Atlantic

“It’s quite an extraordinary book―a thoughtful and deeply empathetic examination of displacement and hope, focusing on the situation of immigrants in Berlin, past and present.”
– The Rumpus 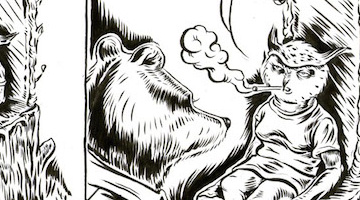 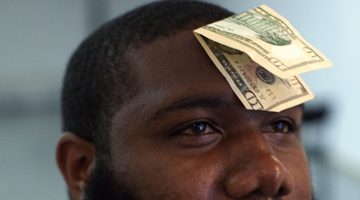